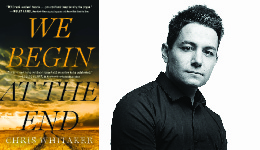 {pages} is ecstatic to announce a Backroom Book Club with debut author Chris Whitaker in celebration of his brand new and wonderful novel, We Begin At The End. Chris will be in conversation with Julie Clark, a favorite at {pages} and the author of last year’s runaway bestseller The Last Flight.  Click here to purchase your copy of We Begin at the End. We only host Backroom Book Clubs when we are confident that you will love the author and the book as much as we do.

CLICK HERE FOR THE ZOOM LINK TO THIS SPECIAL EVENT

Right. Wrong. Life is lived somewhere in between.

Walk has never left the coastal California town where he grew up. He may have become the chief of police, but he’s still trying to heal the old wound of having given the testimony that sent his best friend, Vincent King, to prison decades before. Now, thirty years later, Vincent is being released.

Duchess is a thirteen-year-old self-proclaimed outlaw. Her mother, Star, grew up with Walk and Vincent. Walk is in overdrive trying to protect them, but Vincent and Star seem bent on sliding deeper into self-destruction. Star always burned bright, but recently that light has dimmed, leaving Duchess to parent not only her mother but her five-year-old brother. At school the other kids make fun of Duchess—her clothes are torn, her hair a mess. But let them throw their sticks, because she’ll throw stones. Rules are for other people. She’s just trying to survive and keep her family together.

A fortysomething-year-old sheriff and a thirteen-year-old girl may not seem to have a lot in common. But they both have come to expect that people will disappoint you, loved ones will leave you, and if you open your heart it will be broken. So when trouble arrives with Vincent King, Walk and Duchess find they will be unable to do anything but usher it in, arms wide closed.

Chris Whitaker has written an extraordinary novel about people who deserve so much more than life serves them. At times devastating, with flashes of humor and hope throughout, it is ultimately an inspiring tale of how the human spirit prevails and how, in the end, love—in all its different guises—wins.

Chris Whitaker lives in the United Kingdom with his wife and two young sons. When not writing he works part-time at a local library where he gets to surround himself with books. 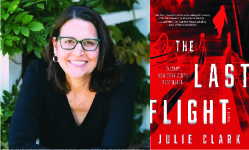 You might know a husband like Claire's. Ambitious, admired, with deep pockets. But behind closed doors, this husband has a temper that burns as bright as his promising political career, and he's not above using his staff to track Claire's every move. What he doesn't know is that Claire has worked for months on a plan to vanish.

A chance meeting in an airport bar brings her together with a woman who seems equally desperate to flee her life. Together they make a last-minute decision to switch tickets—Claire taking Eva's flight to Oakland, and Eva traveling to Puerto Rico as Claire. But when the Puerto Rico plane crashes, Claire's options narrow to one impossible choice: assume Eva's identity, and along with it, the secrets Eva fought so hard to keep hidden.

Born and raised in Santa Monica, California, Julie Clark grew up reading books on the beach while everyone else surfed. After attending college at University of the Pacific, she returned home to Santa Monica to teach. She now lives there with her two young sons and a golden doodle with poor impulse control. Her debut novel, The Ones We Choose, was published in 2018, and has been optioned for television by Lionsgate.

We Begin at the End (Hardcover)