{pages} is pleased to present Daniel Riley and Stan Parish as they discuss their books and their personal connections to Manhattan Beach connections.

CLICK HERE TO REGISTER IN ADVANCE FOR THIS EVENT 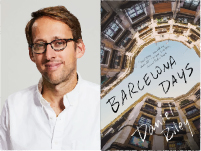 Barcelona Days by Daniel Riley: In this captivating novel, an erupting Icelandic volcano grounds all flights in and out of Europe, forcing four vacationing Americans to reckon with the problems they'd hoped to leave behind in Barcelona.

DANIEL RILEY is the author of Fly Me and a correspondent at GQ magazine. He grew up in Manhattan Beach, California, attended Duke University, and lives in New York City. 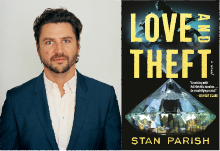 Love and Theft by Stan Parish: When Alex Cassidy and Diane Alison meet at a party in Princeton, New Jersey, the chemistry between them is instant and undeniable. She’s a single mother, local fixture, and owner of a successful catering company. He’s a single father and weekend homeowner—and leader of an armed-robbery crew that just pulled off a record-breaking, precision jewel heist in Las Vegas. Neither one realizes that their lives have overlapped before, and that the shared history they uncover will threaten everyone they love.

The story opens on a kaleidoscopic set piece worthy of a James Bond movie as directed by Robert Altman. . . Love and Theft is expertly and (a rarer accomplishment) artfully written. . . A precision-cut sentence can quicken the reader's pulse as reliably as a surprise twist or a character's excruciating dilemma. When a novel delivers all of the above -- as Love and Theft ultimately does, its race car engine revving to a smooth and satisfying purr -- it can feel to the reader like a kind of miracle. In a word: thrilling!


STAN PARISH is the former editor-in-chief of The Future of Everything at The Wall Street Journal and the author of the novel Down the Shore. His writing has appeared in in GQ, Esquire, Surface, The New York Times, and The New York Times Magazine, among other publications. He holds a brown belt in Brazilian Jiu Jitsu and lives in Los Angeles.

Love and Theft: A Novel (Hardcover)