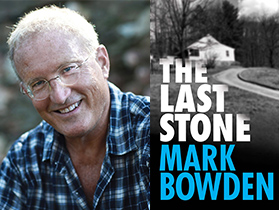 This is a free event at the Manhattan Beach Public Library.

For forty years the mystery of what happened to the Lyon sisters, aged 10 and 12, who disappeared in 1975 from the Wheaton Plaza shopping mall in suburban Washington, DC, haunted an entire community, including journalist Mark Bowden, who covered the story as a cub reporter. With THE LAST STONE, he now returns to the crime to cover the extraordinary effort by authorities to bring their kidnapper to justice and to try to answer the question he could never shake, “Who would commit such a crime? And why?”

When the girls vanished on March 25, 1975, shock, then grief, spread through the community, as a massive police effort found nothing. The investigation was shelved, and the mystery endured. Then, in 2013, a cold case squad detective found something he and a generation of detectives had missed. It pointed them toward a man named Lloyd Welch, then serving time for child molestation in Delaware.

Over months of intense questioning and extensive investigation of Welch, as well as his sprawling, sinister Appalachian clan, four skilled detectives learned to sift truth from determined lies.

Mark Bowden is the author of thirteen books, including the #1 New York Times bestseller Black Hawk Down. He reported at the Philadelphia Inquirer for twenty years and now writes for the Atlantic, Vanity Fair, and other magazines. He is also the writer in residence at the University of Delaware. His most recent book is Hue 1968: A Turning Point of the American War in Vietnam.

Steve Lopez is a California native who has been an L.A. Times columnist since 2001. He has won more than a dozen national journalism awards for his reporting and column writing at seven newspapers and four news magazines, and is a three-time Pulitzer finalist for commentary – in 2012, for his columns on elder care; in 2016, for his columns on income inequality in California; and in 2018, for his columns on housing and homelessness. He is the author of three novels, two collections of columns and a non-fiction work called “The Soloist,” which was a Los Angeles Times and New York Times best-seller, winner of the PEN USA Literary Award for Non-Fiction, and the subject of a Dream Works movie by the same name. Lopez’s television reporting for public station KCET has won three local news Emmys, three Golden Mike awards and a share of the Columbia University DuPont Award.

The Last Stone: A Masterpiece of Criminal Interrogation (Hardcover)