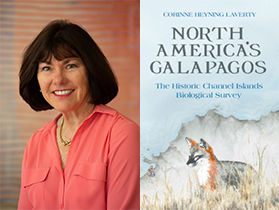 Corinne Heyning Laverty will be at {pages} a bookstore on Sunday, February 23rd at 4:00 pm

Please join us for an afternoon with research fellow and author Corinne Heyning Laverty as we celebrate the publication of her new book, North America's Galapagos: The Historic Channel Islands Biological Survey.

More about the book: "North America's Galapagos: The Historic Channel Islands Biological Survey" by Corinne Heyning Laverty is a narrative nonfiction book that recounts an important series of pre-WWII scientific expeditions to California's eight Channel Islands. This never before told story focuses on a group of researchers, naturalists, and explorers who came together in the late 1930s to embark upon a series of unprecedented expeditions. Their mission: to piece together the human history and biological evolution of Californias eight Channel Islands.

More about the presentation: Corinne Heyning Laverty will present a stunning slide show featuring beautiful color and historic photographs of Californias eight Channel Islands and the pre-WWII scientific expeditions that went out to them. Her discussion will highlight not only the beauty of the islands, but the unique animals and plants that live nowhere else on the planet. She will then introduce to you the scientists who dared to do what no one before or since has done, dishing on their motivations and ambitions and concluding with a synopsis of what was accomplished and what happened to them the day Pearl Harbor was bombed and they were stranded on an island in the Pacific Ocean.

More about the author: Corinne Heyning Laverty is a research associate and fellow at the Natural History Museum, Los Angeles County, an associate of the Santa Cruz Island Foundation and a member of the All Eight Club, a geographic organization that tracks the people who have ever set foot on all eight Channel Islands (of which there have only been 223). Her work has appeared in Lonely Planet, Western North American Naturalist, Eco Traveler, WhaleWatcher, Pacific Currents and Hippocampus Magazine, among other publications.